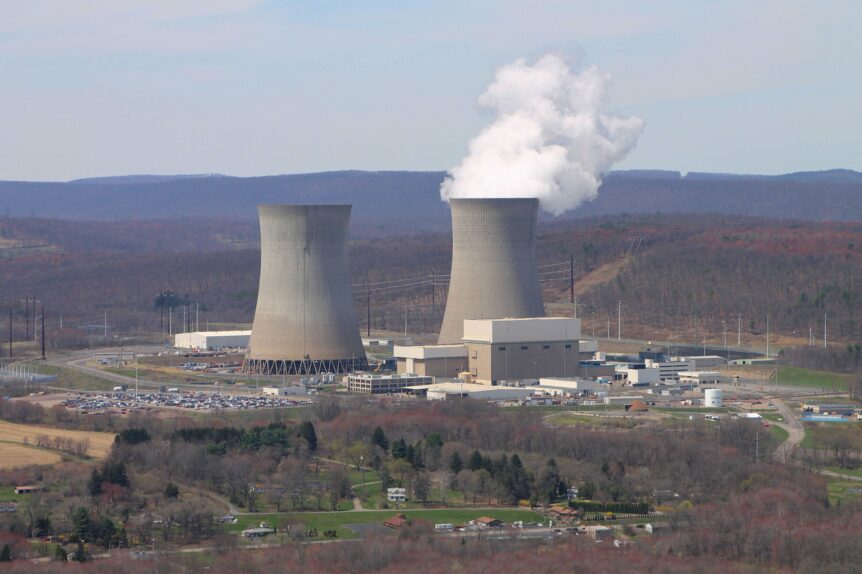 Approaching Berwick on Route 11, you can’t help but notice the huge towers that dominate the landscape. The 540-foot-tall towers belong to Susquehanna Steam Electric Station, also known as the Susquehanna Nuclear Plant.

It’s hard to believe, but it’s been more than 50 years since the former Pennsylvania Power & Light Co., now PPL, announced that it planned to build a nuclear power plant near Berwick along Route 11.

PP&L’s president at the time, Jack Busby, announced the plans to a gathering of community, business and government leaders along with educators and the media on Sept. 24, 1970. But the journey to nuclear had begun long before that for the company, which provided electricity to a 10,000-square-mile service area in central and eastern Pennsylvania.

Back in 1955, the cover of PP&L’s annual report featured an illustration of an atomic particle. The company had announced in July 1955 that it was looking into the possibility of what was then called an “atomic” power plant. Following World War II, the electric power industry as a whole had been looking into the feasibility of using uranium as the fuel to heat water to produce the steam to turn the turbine-generator of a power plant to produce electricity.

The government’s Atomic Energy Commission, now called the Nuclear Regulatory Commission, was leading the way with its Power Demonstration Reactor Program. As groups across the utility industry started forming partnerships to explore power reactor designs during the ‘50s, PP&L joined Westinghouse in the Pennsylvania Reactor (PAR) Project. Unfortunately, it became apparent as PP&L and Westinghouse engineers further studied the “homogenous slurry reactor” that it was not going to be viable. PP&L and Westinghouse suspended the PAR Project at the end of 1958.

But that did not end the company’s interest in uranium as a power source. Demand for electricity grew in the 1960s and the company continued to explore the possibility of a uranium-fueled generating station to join its growing fleet of coal-fired plants.

Meanwhile, several commercial nuclear power plants began operating. Pennsylvania welcomed its first one at Shippingport in the western part of the state in 1957. The Dresden plant in Illinois started up in 1959. By 1970, Philadelphia Electric Co. had the Peach Bottom plant on the lower Susquehanna River under construction.

So it was not a surprise when Busby said at a Danville Rotary meeting in 1967 that PP&L was committed to pursuing the nuclear option. By 1970, after three years of planning, the company had decided to go with a boiling water reactor design from General Electric. That began the process of applying for permits and a license to build the Susquehanna plant on a hill overlooking the river in Salem Township, Luzerne County. The Atomic Energy Commission required two separate licenses: one to build the plant and one to operate it. Public hearings on PP&L’s application were held by the AEC in the Berwick area so residents had an opportunity to examine the company’s plans and to express their opinions to the AEC.

Finally, in November 1973, the construction license was issued and a groundbreaking ceremony was held. But it would be another 10 years before the plant was completed and began commercial operation.

Standing there at the groundbreaking, it was hard to imagine the massive structures that would fill the site. Within days, the area was jammed with construction workers. At the construction peak in the late ‘70s, more than 2,500 workers were employed there. Bechtel Power Corporation was the primary contractor.

As it had at its hyrodelectric plants at Holtwood on the lower Susquehanna River and Wallenpaupack in the Poconos, PP&L also provided recreational facilities for the community. On land it owned across Rt. 11 from the Susquehanna Plant, the company developed the Susquehanna Riverlands, which includes the popular fishing spot, Lake Took-A-While, as well as trails for hiking.

PP&L also built the Susquehanna Energy Information Center, a place where the public could view displays explaining how the nuclear plant operated. Over the years, thousands of schoolchildren from the area attended programs at the Center. And until the events of 9/11 in 2001 happened, many tours inside the plant were given for adults. After 9/11 that public access to nuclear facilities was limited by government regulation.

So how does it work? Inside the plant’s two boiling water reactors made by G.E., heat is produced by the splitting, called fissioning, of uranium atoms. That fissioning inside the fuel pellets that are contained in the fuel rods under water in the reactor vessel releases heat energy that creates steam that drives the turbine-generators to produce electricity.

The plant’s two units can generate about 2,600 megawatts of electricity when operating at full capacity, enough to power about 2 million homes and businesses. In 1977, while the plant was still under construction, Allegheny Electric Cooperative Inc., a western Pennsylvania power company, purchased a 10 percent ownership in the nuclear plant.

As the ‘80s arrived, construction at the plant was nearing completion. In July 1982, Unit 1 received an operating license from the NRC. It generated its first electricity in November, nine years after the groundbreaking. It began commercial operation in June 1983. In 1984 Unit 2 received its operating license in March and generated its first electricity in July. It began commercial operation in February 1985.

But that wasn’t the end of the construction story. In 2003, the Unit 2 turbine was replaced, increasing the unit’s capacity. And, in 2004, the Unit 1 turbine also was replaced. It was a massive undertaking that became the subject of an episode on the National Geographic Channel’s program “World’s Toughest Fixes.” See the show clip below, filmed at Berwick:

In 2015, the Susquehanna plant became part of Talen Energy Corporation. Today, Susquehanna Nuclear, LLC, a division of Talen, operates the plant and owns 90 percent.  Allegheny Electric continues to own 10 percent.