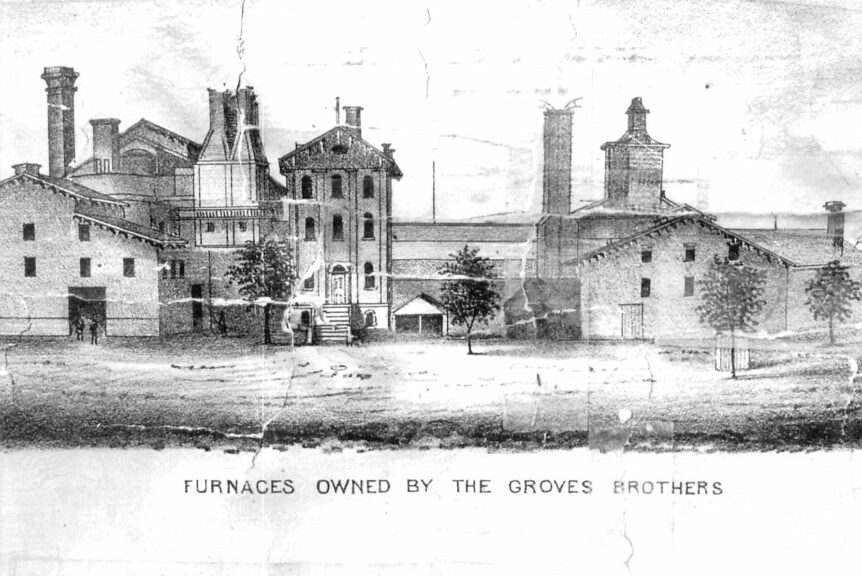 History is all around us, and Danville has an incredibly rich one when it comes to iron furnaces and iron production. You may know Danville from its history as an iron-producing giant. The town played a large part in creating and manufacturing the railroad industry’s iron T-rail.

In the mid-1800’s, Pennsylvania was an iron-producing powerhouse and Danville was, for a time, the center of this activity.  Blast furnaces were where iron ore was melted, either with charcoal or coal, and turned into pig iron.  Danville’s furnaces were among the first in the world to successfully use anthracite coal to make iron.   The sheer number of blast furnaces in the Danville area is staggering for a town of its size – there were 14 that I know of. Elsewhere in Pennsylvania, we have state parks and national parks at sites to commemorate where one specific furnace stood. Meanwhile, Danville had over a dozen!

On October 8, 1845, the nation’s first T-rail rolled from iron ore and smelted with anthracite coal was produced by the Montour Ironworks. That accomplishment gained the company fame throughout the world and thousands of spectators came to Danville to watch the nation’s first T-rails being rolled. By the 1850s, the Montour Ironworks operated the largest solo rail mill in the entire country. By 1870 in Danville, there were eight blast furnaces, four rail mills and a number of puddle mills, foundries and machine shops. To learn more about the history that led up to the creation of the T-rail at Montour Ironworks by visiting this article from Explore PA History.

While Danville’s distinction of producing the first T-rail was impressive in itself, a recent discovery cemented the community’s place in early American history. In 2007, a time capsule was opened at the Trinity United Methodist Church in downtown Danville. One of the items in the capsule was a “company page” from the Danville Pennsylvania Iron Co. (Montour Ironworks). Records on the page showed that the facility produced the iron T-rails that were used to connect the Transcontinental Railroad during the “Last Spike” ceremony at Promontory Summit, Utah on May 10th, 1869.

I created this map to show the approximate location of some of the furnace sites in and around Danville. Several of these sites consisted of multiple furnaces or “stacks”.  For example; it is my understanding that The Montour Iron and Steel Co. had four stacks and The Grove Brothers (Columbia) had two stacks.

The waypoints highlighted on the map show where the furnaces stood; however, all of the original iron furnaces are gone now, with the exception of the Franklin Furnace, which still stands today. Many of the sites where the stacks once stood are on private property now.  You can pass by most of the sites by road without trespassing as long as you stay on the road.  The exception would be the Liberty Furnace which is quite remote.  The Liberty Furnace site can be accessed via PA state game lands 114 but be prepared for quite the hike.  I would not suggest going in the warm season as the area has rattlesnakes.