Berwick is a small, historic borough located within Columbia County and is home to just over 10,000 residents. Berwick was officially settled in 1786, when several Englishmen were recruited to relocate to the area by a nearby landowner who at the time was looking to establish a village near the mouth of Nescopeck Creek. The first structure was built on site in that same year. Berwick now stands as the easternmost river community in the county, and its roots after settlement lie squarely in manufacturing and industrial successes.

Berwick’s proximity to the Susquehanna River gave it great potential for growth and expansion, especially in the area of industry.  The many stagecoaches that traveled through the area created an early need for hotels.  Included in this lodging expansion were the Berwick Hotel, Hotel Morton, and St. Charles Hotel, where St. Charles Park sits in the downtown today. The earliest industries in Berwick included coopers, carpenters, blacksmiths, chair makers, gunsmiths, weavers, dyers, masons, cabinet makers, pottery, and butchers, among others.

Berwick was perhaps best known in the earliest part of the 20 th century for the production of steel railroad cars at the American Car & Foundry Company. For a number of years, the borough was the site of the largest manufacturer of train and subway cars in the eastern United States. In 1904, the plant produced the world’s first all-steel passenger car, which was part of an order by the New York City Subway system. In later years, the American Car & Foundry Company would churn out over 15,000 tanks for the World War II effort. During the war, the borough would become the number one tank-producing community in the nation. Recently, the Borough of Berwick’s Stuart Tank Committee has been able to bring back an authentic Berwick-built tank as a memorial. The tank, coined “Stuie”, will be enacted as a moving memorial to those who produced the tanks.

Berwick’s notable successes do not end with past industrial glory days, however. The American Car & Foundry Company’s Berwick Plant closed in 1961, but the land was purchased by the Berwick Industrial Development Association (BIDA). The complex continues to house manufacturers and still serves as the economic backbone of the community.

Today, one of the focal points of the community is the Jackson Mansion. This century-old Victorian mansion in downtown Berwick is a visible landmark for anyone driving down Market Street.  It was built with specially-worked Vermont stone, with hand-carved woodwork, handmade tiled fireplaces, and monumental 9-foot high entrance doors, set in a beautifully landscaped park. The mansion was constructed for Colonel Clarence Gearhart Jackson in 1879. Colonel Jackson was the son of Mordecai Jackson, the founder of the Jackson & Woodin Manufacturing Company. Jackson’s company would later become the American Car & Foundry Co.’s Berwick Plant after it was purchased by the railroad manufacturing giant in 1899. After the death of Jackson and his wife, their home was willed to the Borough of Berwick and was first used as a public library. It later housed Berwick’s City Hall offices. 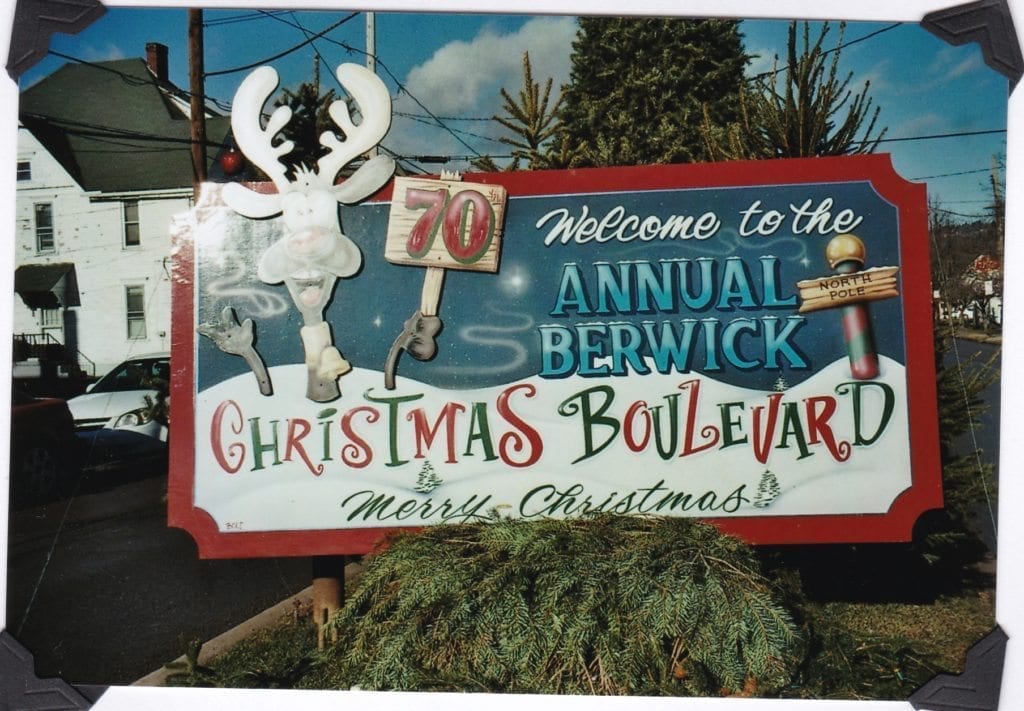 In 2010, permission was granted to the Berwick Historical Society to restore the mansion to its original state. The Mansion and its Carriage House now serve as a museum and library, and are must-see attractions for visiting history buffs and locals alike.

The festive atmosphere of the holidays is on full display in Berwick, making it an ideal year-round destination. Every Thanksgiving, “The Run for the Diamonds” takes place through downtown Berwick over a winding 9-mile course. The event annually draws about 1,000 runners. The race receives its name from the prizes awarded to winners – diamond rings. Since 1947, the Berwick Christmas Boulevard has displayed over a mile of Christmas lights and decorations down Market Street. The Christmas Boulevard is seen by thousands of visitors every year, and is a traditional favorite sure to put everyone in the festive spirit. Santa Claus is present every year to serve Berwick’s famous Wise Potato Chips to everyone who drives past him. During the Christmas Boulevard, the downtown is also treated to a Victorian Nights celebration and various other holiday celebrations.