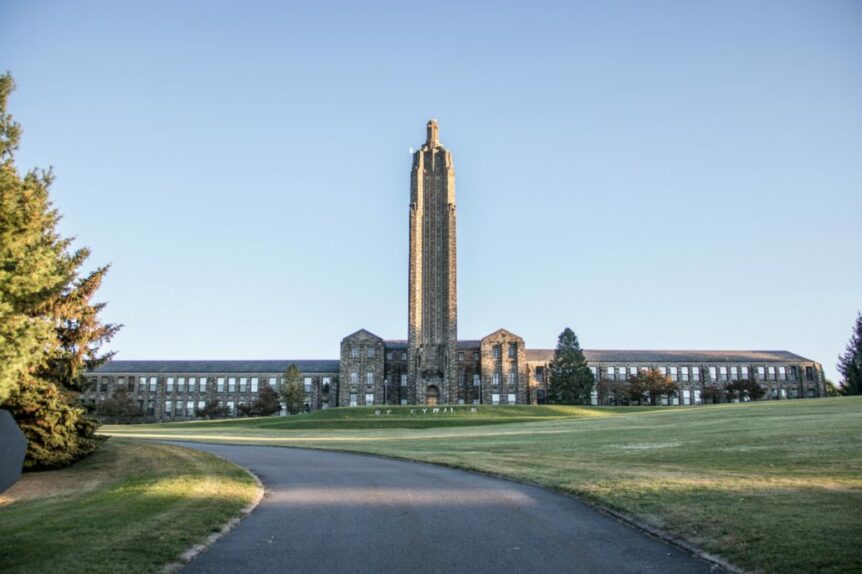 If you’ve ever driven into Danville, you’ve probably noticed the iconic stone tower on a hillside beside Route 11 that dominates the skyline. Perhaps, like me, you’ve wondered about it and how it came to be built.

The story really begins in the region’s iron-making and coal-mining past when many Slovak immigrants came here to work in those industries. A priest named Fr. Matthew Jankola in the Scranton area, himself a Slovak immigrant, saw a need to educate the immigrants’ children and preserve their Slovak faith and culture. So, he looked to Slovak young women to become a teaching order. Pope Pius X approved the establishment of the Congregation of the Sisters of Saints Cyril and Methodius in 1909.

The number of Sisters in the order grew, and by 1918 they needed to find a larger home. Their leader, Mother Emmanuel, heard about a property in Danville that might be suitable. It was the former home of John Peter Grove and John Michael Grove, owners of Grove’s Furnace, which produced pig iron. As one history of the area put it: “Among other of the evidences of their great wealth is the extensive Grove’s residence, one of the most expensive private residences at the time of its building in the State.”

Situated on a hill, the 187-acre property included a 44-room mansion, stables, barns, greenhouses, a farmhouse and a liveryman’s house. The mansion, called “Castle Grove,” was built in 1867. In 1900, Thomas L. Evans, a local contractor, began building the wall that surrounds the mansion. It contains 395,000 bricks.

The next owners were Caroline Grove Bennett and John Bennett, but after their deaths, the estate was abandoned in 1905.  After the end of World War I, the property was listed for sale. On June 7, 1919, the sale to the Congregation was made final. The Sisters named the entire estate “Villa Sacred Heart.”

Work then began to open a school in the mansion. The first students came in September 1920. The First Catholic Slovak Girls Academy, later renamed Saint Cyril Academy, opened in 1922 as an all-girls boarding and day school, bringing young women from all over the U.S. and abroad to experience a superb Catholic high school education. An L-shaped wing was added in 1955 to provide facilities for 140 more students at the academy.

The Academy closed in 1999.  But the educational mission continues: Today Saint Cyril Preschool and Kindergarten, begun in 1977, provides early childhood education for students ages three to five. On a recent visit to Villa Sacred Heart on a school day I saw dozens of happy children playing in the courtyard in front of the school.

So how did that tower come to be? The school’s early success brought a need to expand the mansion, and ground for a new school was broken in June 1929 on the field behind the mansion. The cornerstone was placed in September — just before the start of the Great Depression. The stone building included the 170-foot stone tower in the center that dominates the structure today.

The new school building opened in September 1931. But despite the Depression, construction at Villa Sacred Heart was not done. On August 27, 1934, the Congregation celebrated its 25th anniversary. The collection that day provided the initial money for the construction of a new chapel. The Romanesque Style, 12th-century chapel seating 600 was dedicated on October 17, 1939.

After undergoing restoration work in 1989, the chapel was consecrated as the Church of Saints Cyril and Methodius. And that June, the Vatican declared the church a Minor Basilica.

But children’s education was only part of the mission when the Congregation of St. Cyril and Methodius was formed. Another part was the preservation of the Slovak culture.

To do that, the Sisters operate the Jankola Library and Slovak Museum to provide a unique and specialized source of historical information and cultural resources. The library is named in honor of the Congregation’s founder, Fr. Matthew Jankola.

Displaying books, reading material, artifacts and memorabilia that pertain to Slovak and Slavic history, language, literature, fine arts, spirituality and science, the Museum began in the mid-1940s when collections of books, papers and artifacts pertaining to Slovak history, poetry and literature were being sent to the Sisters.  Over the years the materials accumulated from all over the world. Today Jankola Library contains 20,000 books and offers additional educational resources including Slovak periodicals, newspapers and maps. The library contains rare and memorial books, Bibles and children’s literature, as well as Slovak music and plays. Slovak language kits are available for language instruction.

Unfortunately, because of Covid19, tours of the Villa and the Basilica and admittance to the Jankola Museum are not being offered.

But you can put on a mask and enjoy a walk on the beautiful grounds, a serene setting of 70 acres of lawns, gardens and orchards, and an additional 50 acres of fields and woodlands. There’s no shortage of beauty and sources of spiritual inspiration with the Sisters’ outdoor Stations of the Cross, labyrinth, shrines and prayer walk.