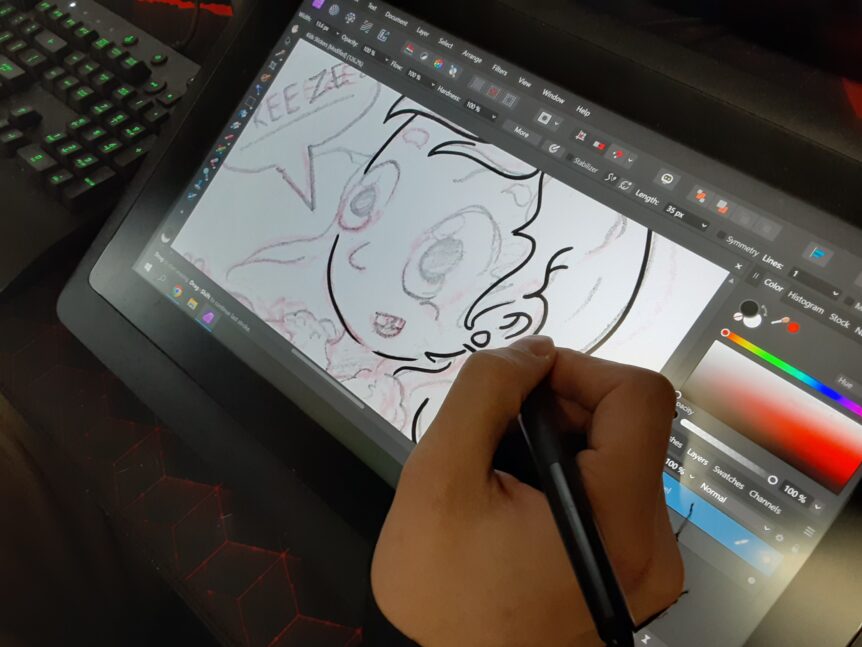 Like most people just graduating from college, Jordan Franklin needed to find a job in 2013 to pay the bills.

So, he went to work remodeling stores for a large national chain. It was good work. He got to travel, and he made money.

But his first passion was art. After all, his bachelor’s degree from the Art Institute of Pittsburgh was in Video Game Art and Design. As a kid, he loved art and gaming. And he was a big fan of the late Frank Frazetta, often called the “Godfather of fantasy art,” who lived for a time in East Stroudsburg where there’s a museum of his work.

Along about 2020, Franklin started to take the art that had become just a hobby to do after his work hours more seriously. He realized that he wasn’t happy. So, he decided to do what he really wanted to do. In 2021 he moved back to Berwick where he had spent his early years before moving to Lock Haven and graduating from high school there.

And the art business he named Dyelute, was born.

Dyelute, which is a play on the words dye (a type of paint) and dilute (to thin out), is not your typical art. Franklin’s focus is on concept art and fantasy art.

What is that exactly? Concept art shows visually an idea that can be used in films, video games, animation, comic books or other media before it’s developed into the final product. And fantasy art brings to life supernatural themes, ideas, creatures or settings.

“It’s not the conventional art that people go to see,” Franklin told me when I visited his Berwick studio recently. “People want to see art they can hang on the wall. I’m creating original work out of my own imagination.

“I whole-heartedly enjoy making ideas into fleshed out creations and seeing the immaterial become reality.”

Franklin does commission work for people who have a specific project in mind. He also has several projects of his own currently in work, including a coloring book and a pirate game. He showed me concept art that depicted what enemy characters might look like in the game.

He’s already published one game, “Not A Knight”, that has gamers “…rise from nothing and become the knight you’re meant to be!” Working their way through the game lets the player “…sneak past enemy guards, master archery, show off blacksmithing skill and gain riches.”

One of the characters on Dyelute’s website caught my eye. Called “DragonBorn Paladin,” Franklin says he created it as a way to develop a character design for a “Dungeons and Dragons” idea. He wanted to work through developing the look, feel, and equipment that this character would use. My oldest grandson is a big Dungeons and Dragons gamer who plays every Saturday with a group of his friends, and I knew he would love it.

As Franklin showed me around his studio and the projects he’s working on, we talked about his commission work for clients. That takes precedence over his own projects, he told me, adding that he’s trying to develop that business.

Of course, that immediately made me think of another teenage grandson who collects “duck stuff” as he calls it and has a birthday in January. What could make a better gift for a doting grandmother to give than a piece of original artwork to hang in his room? Hope he likes what Franklin comes up with!

Have a project you’d like to see him do? Go to dyelute.com and send him an email.