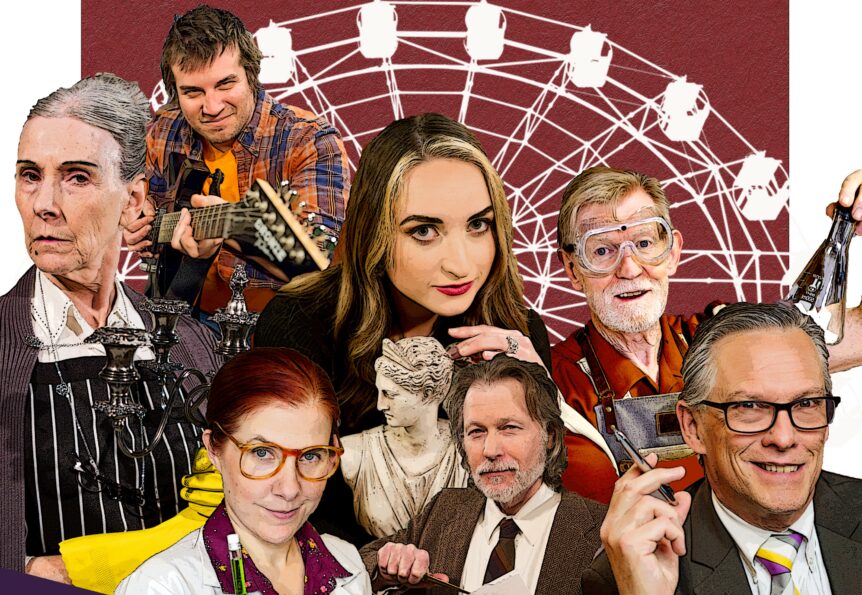 Bloomsburg –  Starting April 1st, Bloomsburg Theatre Ensemble will present Fair Food Foul Play: A BTE Murder Mystery on Zoom. “When control of the Deep Fried Duncans TM empire comes up for grabs, a cast of oddball characters angle for glory, each harboring a potential motive for murder. In this uniquely participatory format, audience members become investigators, forming a team of fellow sleuths to interrogate the eccentric suspects in real time, and bring the culprit to justice.”

Fair Food Foul Play marks a return to the (virtual) stage for BTE, after live performances came to a halt last Spring. Will Ralston, a 1989 graduate of Bloomsburg High School with a long career in television and film (including writing credits on HBO’s Treme and The Deuce) cooked up the tale specifically for the members of BTE. Ralston, who holds a BFA in film production from NYU’s Tisch School of the Arts, is also serving as director of photography and editor of the filmed segments which accompany the live, interactive event.

Though it winks at some of the markings of the traditional murder mystery, Fair Food Foul Play stays unpredictable by tossing up the mystery solution every weekend. Each night, participants will be split into groups of investigators, and work together to question the suspects in private “interrogation rooms.” Players have the option to sign up as individuals and pair up with other players over Zoom, or to sign up as households, perfect for a family game night at home. You can even request to be teamed up with other players on separate screens, near and far.

Fair Food Foul Play runs for three weekends, starting Thursday April 1st, and playing Thursdays through Sundays at 7:30pm (excluding Easter, April 4th, on which the show is closed). For technical purposes, tickets must be purchased 24 hours in advance of the show. “Seating is limited,” says Managing Director White-Spunner, “so we suggest booking now.” Tickets are available from the BTE website www.bte.org , or by calling the BTE Box Office at 570-784-8181, and don’t hesitate to leave a message.