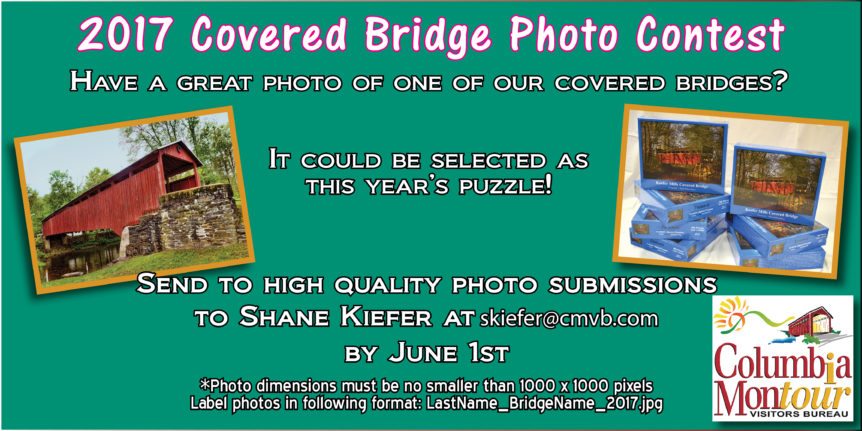 Each year, the Visitors Bureau holds a photo contest to produce a 500-piece puzzle featuring one of the area covered bridges. Limited-edition puzzles have been produced the past six years and have featured the East & West Paden bridges (2 times), the Knoebels Bridge, Keefer Mills Bridge, Esther Furnace Bridge, and most recently, the Stillwater Bridge.

The 2017 photo contest is now open. Individuals who have photos of one of the counties’ 25 covered bridges are encouraged to submit them for a chance to have their photo featured as the 2017 Covered Bridge Puzzle. Each photographer is permitted to submit up to FOUR of their covered bridge photographs. All entries will be judged primarily on their superior quality, composition, and lighting. Photos from all four seasons are encouraged.

Entries can be emailed to Shane Kiefer, Director of Marketing at skiefer@cmvb.com. No entries will be accepted after June 1st. Photos should be high quality and should be no smaller than 1000 x 1000 pixels. Submitted photos should be labeled as follows: LastName_BridgeName_2017.jpg. The overall winner and several honorable mentions will be announced following the final submission deadline. Email with further questions.