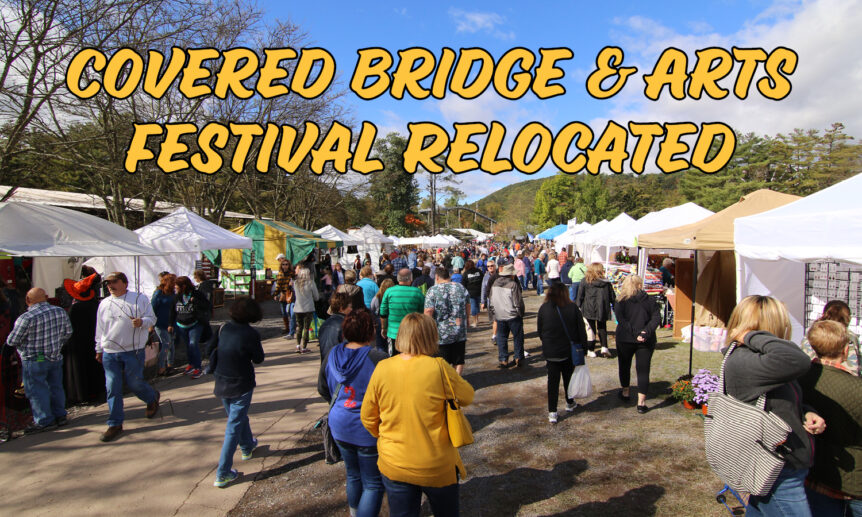 BLOOMSBURG, PA – The annual Covered Bridge & Arts Festival, held at Knoebels Amusement Resort in Elysburg since 1982, will have a new home in 2021, and in future years as well.  The fall festival, which traditionally draws approximately 150,000 people over four days in early October, will now be held at the Bloomsburg Fairgrounds.

Festival organizers from the Columbia-Montour Visitors Bureau (CMVB) recently met with Knoebels management to discuss logistical challenges, exacerbated by the national labor shortage, of continuing the festival at the amusement resort.  Faced with the prospect of cancelling the festival for a second consecutive year, the group made the decision to coordinate a new home for the event moving forward. For vendors, the Fairgrounds venue will be able to provide the same amenities that have been offered in prior years to ensure a successful event. Visitors will be able to look forward to increased parking opportunities as well as regular tram service to and from the parking lot.

“Looking back at the Covered Bridge Festival’s long history, we would be remiss if we did not thank the Knoebel family,” remarked Otto Kurecian, Executive Director of the Columbia-Montour Visitors Bureau. “Their foresight enabled the CMVB to literally keep our doors open. In the process, they nurtured a tiny festival and assisted us in creating one of the premier craft festivals in the United States. We will remain forever grateful for their efforts.”

Knoebels management also reflected on the long history of the event at the park and offered optimism for the future.

“The Covered Bridge Festival has been a wonderful partnership between the Visitors Bureau and Knoebels for nearly 40 years,” said Brian Knoebel, Knoebels co-owner. “We are honored to have been a part of the festival’s growth and are excited to see what the future holds, with the Bloomsburg Fairgrounds being the perfect location to provide an opportunity for continued growth.”

Ultimately, the CMVB festival committee made the decision to contact the Bloomsburg Fairgrounds as a potential alternative host location for the event.  Fair board officials convened to discuss feasibility for the Covered Bridge & Arts Festival to be relocated to the Fairgrounds and unanimously decided in favor of hosting the event in 2021 and beyond.

“The entire Fair Board recognized the impact this festival has on the surrounding community and knew we needed to do whatever it took to ensure the Fairgrounds could serve as its new home,” said Randy Karschner, Bloomsburg Fair Board President. “The Bloomsburg Fair recognizes its role in serving as a key community partner, and we are looking forward to welcoming the Covered Bridge Festival to Bloomsburg.”

Each year, the Covered Bridge & Arts Festival provides a boost of approximately $14.2 million in overall economic benefit to the region. In recent years, the tourism industry as a whole generated $4.4 billion in state and local taxes – enough to reduce the tax liability of each household by about $850 each year.  For the past five years, the festival has been named as one of the Top 50 Arts & Crafts Festivals in the United States by Sunshine Artist Magazine.

“Looking forward, we need to provide a big thank you to the Bloomsburg Fair for being a community partner in the truest sense,” said Kurecian.  “We faced the real possibility of having to cancel the event. The Fair Board’s quick actions truly saved the Covered Bridge Festival.”

Additional details about the festival’s new layout at the Fairgrounds will be announced in coming months. For this year, the Covered Bridge & Arts Festival will remain in place for October 7 – 10 as planned.  Festival hours will also remain the same, and the event will maintain free parking and free admission. This year’s Bloomsburg Fair also remains scheduled as planned for September 24 – October 2. To learn more about this year’s Covered Bridge & Arts Festival, please click here.