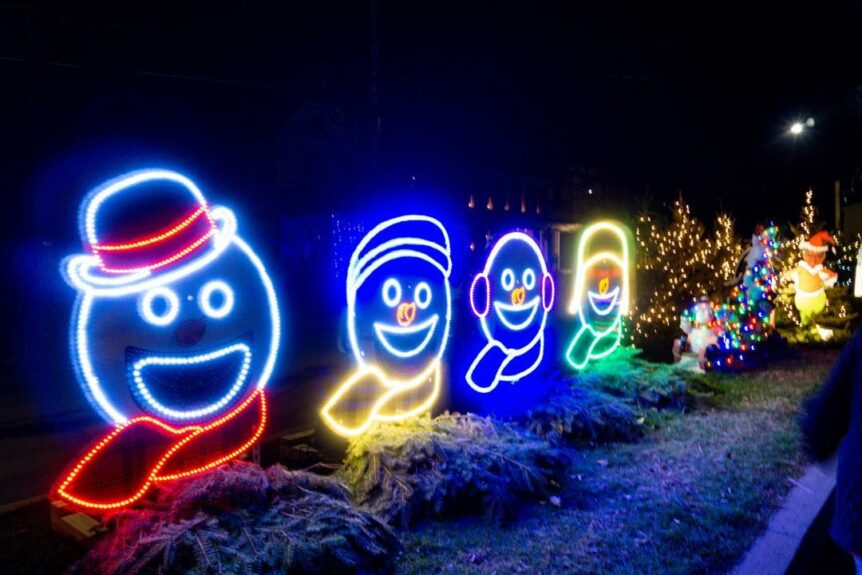 The year was 1946. World War II was over, the Allies helped to victory by the Stuart tanks manufactured in Berwick at American Car & Foundry. The men and women who had served in the Armed Forces had come home. There was much to celebrate.

That year Maynard Johnson, publisher of the Berwick Enterprise newspaper and a founder of the Junior Chamber of Commerce – the Jaycees — was approached by Arthur Wark, a sportswriter, who proposed a larger display than the traditional plots Berwick had always decorated in front of the First Presbyterian Church and the YMCA. And so the first Avenue of Light display happened with trees set up along old railroad tracks in nearby Nescopeck to celebrate the holidays and honor the returning soldiers and those who had served at home, working at AC&F and other area businesses to support the war effort.

But bigger things were to come. On December 5, 1947, what is known today as “Christmas Boulevard” along Market Street in Berwick was lit up for the first time. Plots of grass in the middle of 16 blocks of Market Street were assigned to veterans’ groups, churches, clubs and local industries to decorate in a “religious or fairy tale theme.”

Johnson would sketch out most of the plots himself on graph paper. Basic ideas came from Christmas cards, or photos in magazines. Measurements and material lists and colors were then given to the various groups assigned to each of the plots. The displays were built with wood, heavy sheets of plastic, wire netting and fabric.

Initially the displays were built in borrowed garages or other buildings. But in 1955, the Jaycees constructed their own building to use as Boulevard Headquarters with space to construct the displays.

Over the years, moving figures were added, including many from renowned New York City animation artist David Hamberger. Dozens of Hamberger’s vintage mechanical figurines dating back to the 1940s have been acquired over the years. Community members constructed tiny houses and buildings to display the Hamberger figurines.

Each year, there’s a theme for the displays. For example, the 2010 theme was “The Classics of Christmas.” For the 75th anniversary this year, the displays will honor veterans.

Driving down the mile-long boulevard is free, and Santa and his helpers give each car a bag of potato chips donated by Berwick’s Wise Foods. In 1947 Gene Harvey was Santa to help open the Christmas Boulevard.  He continued to play Santa at the Boulevard for its first 36 years. The 1984 Boulevard was dedicated to him, and a permanent memorial was placed in his honor.

But It’s a labor-intensive process to put on the Boulevard each year. Since the figurines are used year after year, they tend to get faded and worn, so among other tasks the Jaycees washed and painted them each year to make them look brand new.

And putting on an event like the Boulevard isn’t cheap. The electric bill alone is in the thousands of dollars for the lights that adorn more than 300 trees and the spotlights for the displays. Since there’s no admission fee, all the money comes from donations, business sponsorships, and fundraising events.

By 2014, after 68 years, the Jaycees membership and their loyal volunteers were dwindling and it looked like the Christmas Boulevard tradition would end.

But the Berwick community wasn’t going to let that happen. That Fall the Berwick Boulevard Association formed, and in six weeks managed to get the 2014 display up and running.

Operating out of the aptly named “Jingle Hall” on 11th Street in Berwick, the Boulevard Association has been putting on the Christmas Boulevard ever since. Says Berwick Boulevard Association President Michael Monico Jr., “It’s a year-long process. Our volunteers take down the displays on New Year’s Day. They get about a month off and then it’s back to planning the next Boulevard and cleaning and refurbishing all the displays.”

It’s a talented group of volunteers that I had the opportunity to meet and talk with at Jingle Hall recently. It was a working night for the group. In the basement of Jingle Hall there’s a workshop that would make Santa proud. There’s a storage room for the mannequins and other figurines, a room dedicated to fixing the mechanical figurines and an art room where displays are repainted and new ones created.

This year’s military display will have a World War II theme in keeping with the 75th anniversary. There’s going to be a USO lady as well as figures dressed in World War II uniforms. Boulevard volunteer Stephanie Bodnar told me the military display is usually in the block near 13th Street, and they’re hoping the Stuart Tank will be near it.

Dave Talanca, one of the talented artists that works on the displays, gave me the basement tour, introducing me to the group that paints the figurines and other display pieces. The youngest volunteer, Marisa Canouse, a junior at Berwick High School first volunteered in 2020 because it was “something different to do.” This year her task is a plot depicting a winter wedding 75 years ago.

And there actually have been weddings at Jingle Hall. In 2017, volunteers Deb and Hank Henrickson, who have been involved in the group since it took over Christmas Boulevard in 2014, got married there.

More volunteers are needed for the Boulevard. From cutting the trees in mid-November and setting up the displays the Saturday after Thanksgiving (Nov. 27) to taking down the displays on New Year’s Day, there’s something for everyone to do. And if you have carpentry or art or electrical skills or you can fix a motor, there’s a special need for you. But there’s also a need for two or three people to be Santa’s helpers and pass out the Wise chips every night. Also, all those lights don’t turn on with the flip of a single switch – each of the display plots has its own switch that volunteers must go around and turn on at the beginning of the evening and turn off at the end.

Although income from rentals of the Jingle Hall meeting room help to fund the Christmas Boulevard, Monico said, donations also are needed. There’s a donation box at the event, or you can send a check made out to Berwick Christmas Boulevard to Jingle Hall, 235 W. 11th Street, Berwick PA 18603.

The Christmas Boulevard will be available every night from December 4 to December 31 from 6 PM – 10 PM. Be sure to have the kids bring their letters to Santa to put in his red and white striped mailbox!