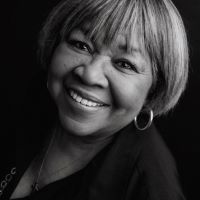 “I’m the messenger,” Mavis said on the eve of her 80th birthday. “That’s my job — it has been for my whole life — and I can’t just give up while the struggle’s still alive. We’ve got more work to do, so I’m going to keep on getting stronger and keep on delivering my message every single day.”

That message — a clarion call to love, to faith, to justice, to brotherhood, to joy — lies at the heart of We Get By, Staples’ spectacular 12th studio album and first full-length collaboration with multi-Grammy Award-winner Ben Harper. Backed by her longtime touring band, Staples breathes extraordinary life into Harper’s compositions on the record, delivering roof-raising performances with both a youthful vigor and a commanding maturity.

We Get By is a timely collection, arriving in the face of deep social divisions and heightened political tensions, but like everything Staples touches, it’s also larger than any particular moment, a timeless appeal to the better angels of our nature that’s universal in its reach and unwavering in its assurance of better things to come.

Hailed by NPR as “one of America’s defining voices of freedom and peace,” Staples is the kind of once-in-a-generation artist whose impact on music and culture would be difficult to overstate.

She’s both a Blues and a Rock and Roll Hall of Famer; a Civil Rights icon; a Grammy Award winner; a chart-topping soul/gospel/rhythm-and-blues pioneer; a National Arts Awards Lifetime Achievement recipient, and a Kennedy Center honoree.

She’s collaborated with everyone from Prince and Bob Dylan to Arcade Fire and Hozier; blown away countless festival goers, from Newport (R.I.) Folk and Glastonbury (U.K.) to Lollapalooza and Bonnaroo Music and Arts; performed with The Band at The Last Waltz, and graced the airwaves on the Tonight Show with Jimmy Fallon, The Late Show with Stephen Colbert, the Ellen DeGeneres Show, Austin City Limits, Later … with Jools Holland, the Grammy Awards and more.

At a time when most artists begin to wind down, Staples ramped things up, releasing a trio of critically acclaimed albums in her 70s with Wilco’s Jeff Tweedy that prompted Pitchfork.com to rave that “her voice has only gained texture and power over the years” and People magazine to proclaim that she “provides the comfort of a higher power.”

In between records with Tweedy, Staples teamed up with a slew of other younger artists — Bon Iver’s Justin Vernon, Nick Cave, Valerie June, tUnE-yArDs and M. Ward, among others.