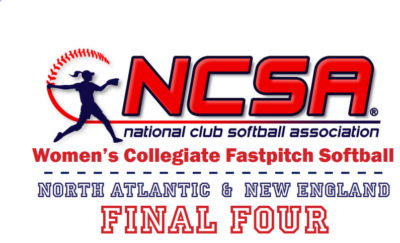 Enjoy a fun family weekend at the ballpark this Saturday and Sunday at Echo Fields in Danville, as the National Club Softball Association’s (NCSA) 2022 North Atlantic Regional and New England Regional women’s fastpitch final four tournaments come to town. Eight qualified teams from throughout the northeast will hit the field this weekend on Saturday, April 23 starting at 9 AM to battle for NCSA World Series berths.

The North Atlantic teams will open their tournament at Echo Fields (located behind F.Q. Hartman Recreation Area) on Field #1 with opening round games set for 9 AM & 11 AM. Participating teams will be: Sacred Heart University, Penn State University, Rutgers University & University of Delaware. Subsequent second round games will take place at 1 PM and 3 PM.

The New England Region will also begin their tournament at Echo Fields at the same time on Echo Field #2. Participating teams will be: University of Maine, University of Connecticut, Cornell University & St. Bonaventure. Subsequent second round games will also take place at 1 PM and 3 PM.

The competition will resume Sunday, April 24 at 9 AM at Echo Fields. The North Atlantic Championship Game and the New England Championship Game are both slated for 11:30 AM. The champions and runners-up from each region will subsequently move on to play in the NCSA World Series May 19-22 in Columbus, Georgia.